Climbing up Wildcat Mountain out of Pinkham Notch.

I think I might have actually captured the vertical nature of this ridiculous climb. A really steep trail can often gain 750′ per mile…this was 750′ in 0.4 miles, and 1500′ in 1-mile. It took me an hour to hike that mile. The rest of the day was a littler quicker, but not much.

This is how i felt when I saw this:

For all that climbing this was the view 😦

This is super steep as well but the photo does a poor job capturing it. 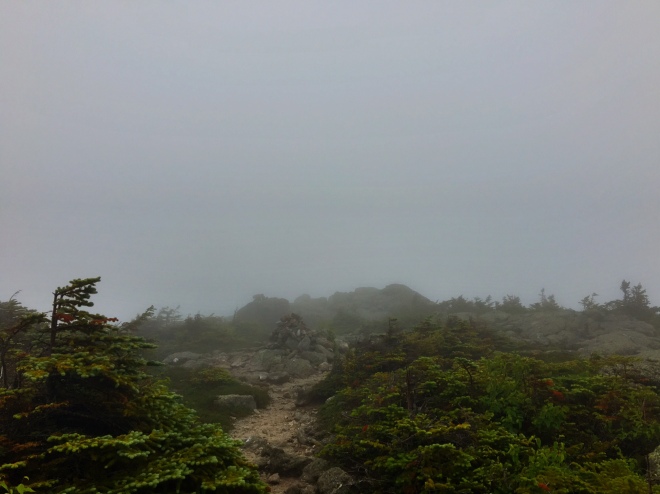 Around 6pm the skies cut loose just as I was getting over the last peak, North Carter Mtn.
The descent was super steep and sketchy with a river flowing down the middle of it. Just before arriving in camp at 7:45pm the skies cleared.

The sun even popped out 🙂

The 18 miles today took almost 14 hours door to door. I did take a 45min stop at the Pinkham Notch Visitor Center for some food and wifi as well as a 30 min stop at the Carter Notch Hut (bummed I forgot to get a pic), but other than that I was on the go. It was another really tough day but at the end of the day I felt a little bit better than yesterday…the terrain was just slightly less punishing. My new shin splint is still giving me discomfort but it’s been manageable. I will try to pic up some Aleve to augment the Advil when I’m in town tomorrow.