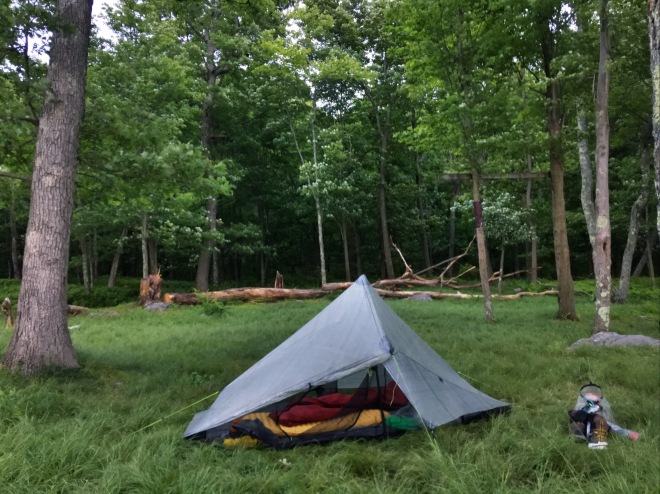 In the summer of 2016 I completed a thru hike of the Appalachian Trail and my primary home for those 117 days was the Zpacks Hexamid Solo Plus. When I purchased the tent the goals were: ultralight weight (~18oz w/o stakes), use of a single trekking pole to set up, and I liked the idea of supporting a cottage industry that manufactures its products domestically.
Overall, I was very happy with the tent and it was well suited for the AT environment.

Background:
The Hexamid is a tarp style tent with integrated bug netting and a removable bathtub style floor. This tent sets up with a single trekking pole which I prefer over two pole varieties for a couple reasons. I like the idea I can still setup my tent if I lose a pole or one happens to break. I also wanted the versatility to use the tent for bicycle touring when I have no trekking poles for which a 3oz collapsible carbon fiber pole is sold separately (better than needing to have two of these).

The “Plus” in the Hexamid Solo Plus refers to the idea that in a pinch you could fit a second person in this tent. I definitely would not plan on a 2nd person even if you are well acquainted. Although there is adequate floor space, the additional person would be on the non-door side where the wall/roof of the tent is only inches from your face. This would be even worse if there was a lot of condensation as your sleeping bag and head would likely touch the walls throughout the night thereby waking up with a wet sleeping bag and head!

Setup:
The setup is relatively quick (just a couple minutes), but unfortunately, my OCD like tendencies would cause me to keep fiddling with it long after it was more than adequate. This style of tent does not have a separate rainfly which makes it easier to keep the inside of the tent dry if it’s raining out while you are setting it up.

Although not a freestanding tent (must be staked) I never had a problem on the AT, occasionally using a large rock instead of a stake if the ground was too hard. I even got fairly adept st pitching the Hexamid on tent platforms which are common in New Hampshire and Maine (see pic). It takes a little creativity, and I would not recommend you attempt this for the first time in the rain, but overall it was a fun and satisfying challenge that broke up the otherwise routine drill each evening.

6-10 tent stakes are needed to complete the setup of the tent. Six being the minimum: four-corners, front and back. An additional four stakes can be used to pull out the walls creating slightly more interior volume. More importantly, these extra tie outs are helpful during inclement weather, specifically wind.

I felt the only minor downside was the Hexamid needs a fairly large piece of real estate to setup considering it’s a one person tent. The space needed for guy-lines and staking out creates a large footprint, even if the actual flat area needed where you’d be lying is relatively small. I definitely felt like my Big Agnes Fly Creek 2 needs less area to setup which makes it easier find a flat level area to sleep on. In general this did not cause many issues but the handful of times it did come up it was frustrating (I was probably just cranky after a long day).

Function:
Overall I felt like the tent performed very well in bad weather. I had a couple of rain storms that were dumping buckets of water through the night while I stayed dry and warm inside. Occasionally, I’d get a little spray through the netting around the perimeter of tent, either from rain bouncing off the ground or a driving wind. The result might be the nylon of the sleeping bag getting a little spray on it, but definitely not overly concerning. One night when I felt like it could be an issue I just stuck my pack at the foot of the tent to block it.

One of the selling points of this model is the fact that the waterproof bathtub floor is removable allowing one to use it separately as a tarp for cowboy camping or even todry it separately if the bottom gets wet. Personally, I might have removed the floor once..it was a bit too much work to justify taking out. The tent dried so quickly in a slight breeze and sun that it never necessitated removing it and I’m not a big fan of cowboy camping on the AT (it can always rain).

Condensation was a minor issue, as is the case for all single wall style tents. Ideally you would keep one or both flaps to the vestibule open which allows more airflow to mitigate the condensation. Unfortunately, on cold nights closing the vestibule would be preferred to keep the warmth inside the tent. Of course, not pitching a tent directly next to a river or lake is your best bet to prevent condensation. It’s amazing what 7-10′ of elevation above a water source can do to mitigate condensation. The condensation was mostly an issue at the foot of the tent because my sleeping bag would often touch a wall while I was thrashing around at night causing they nylon to get damp.

You should also be conscious not to accidentally shake a wall of the tent which causes the condensation to rain down on you (a one time sort of lesson). My worst experience was a very cold humid night which caused condensation that froze to the inside of my tent. The good news was nothing dripped on me because it froze, but it did make drying things out a bit more challenging..luckily the sun was out that day and solved that problem quickly.

I touched on the tent size while describing the possibility of squeezing a second person inside. Although, this would not be ideal there is plenty of room for one person and a gear explosion (see gear explosion pic). I’m 5′ 10″ and felt like I had plenty of head room while sitting up , but often felt like my head was relatively close to the wall and roof while lying down. I would not recommend this model if you are over 6′ (the Altaplex model would be better). 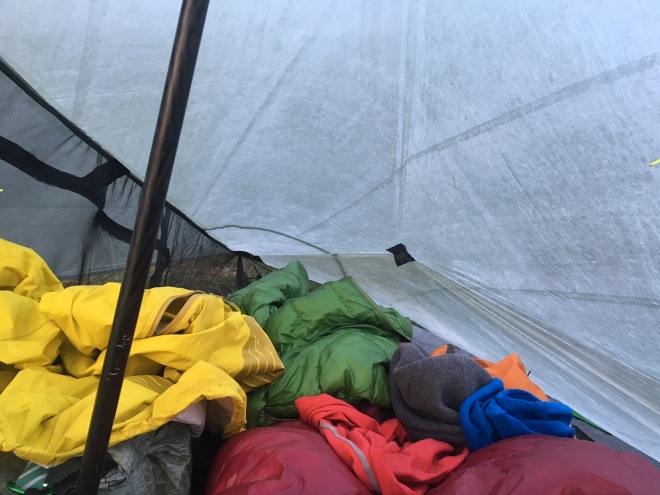 One minor issue I had was when rolling up the vestibule flaps and using the toggles to secure it to the tent the rolled up portion would often come undone. A simple fix would have been for Zpacks to move the toggle/loop further down toward the bottom of the tent. Ultimately, not a big issue…just little annoying.

Lastly, my only real hang up with the functionality is that the door opening is on the smaller side. After a long day of hiking with a backpack I wasn’t looking forward to doing the limbo to get inside my tent. I definitely didn’t look forward to getting in/out for a 2am pee run. 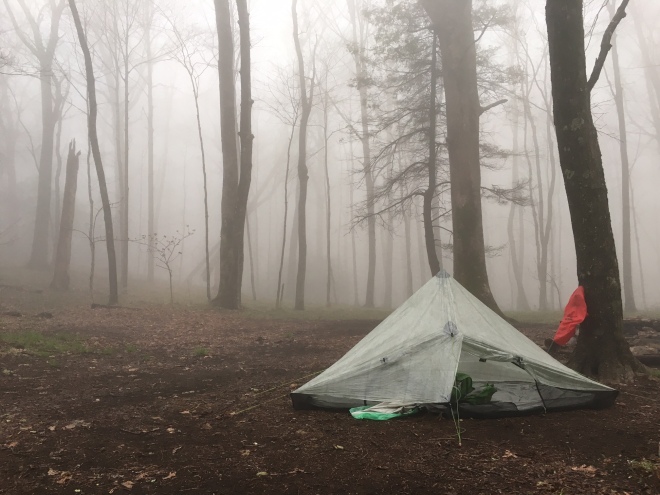 Final Thoughts:
As I said at the beginning, overall, I was very happy with this tent. The weight, design and function are impressive compared to what else is on the market. It is definitely on the pricier end for a tent but well in line with other cottage industry tent manufacturers. This version was ~$540 with the various options I chose. Good lightweight tent stakes can run another $25-$35. All seams are factory sealed and minor repairs can easily be made with the Cuben fiber repair tape provided.

Previously, I’ve have primarily used the very popular Big Agnes Fly Creek 2. As light as that tent is for a mass produced tent the Hexamid was less than half the weight.

If I was to do it again I’d consider a very similar model called an Altaplex. It has a bigger door and more headroom with a sewn in bathtub floor. It’s costs a bit more ~$585 and requires a longer trekking pole than mine can adjust to, which would require the purchase of a 12″ pole extender (just something else to break or lose). So, kind of a toss-up.

Hopefully, this review was helpful.

This is a link to the Zpacks website describing all the specs for the Hexamid and other models. There are also tent setup videos for each model to give you an idea of what’s involved as well as the relative size/space of the tents. 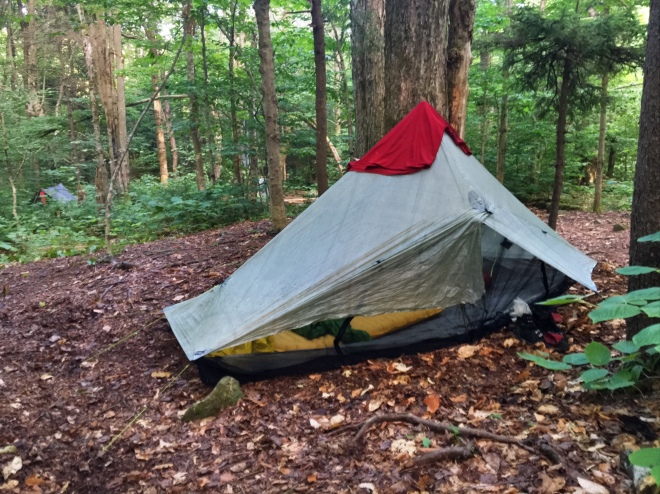